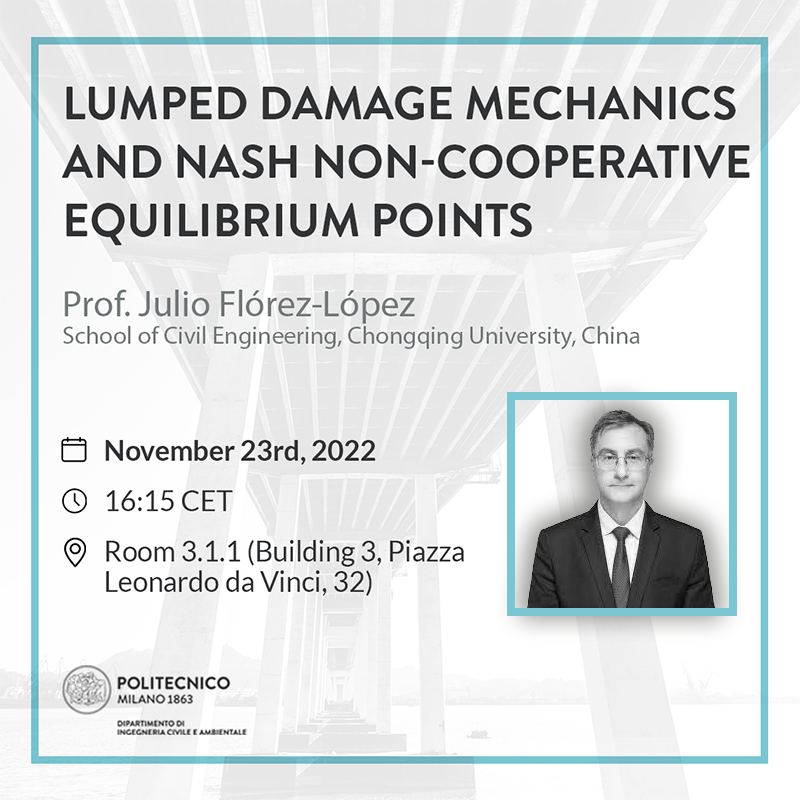 The mathematical problem corresponding to classical continuum damage mechanics can be defined as a non-cooperative equilibrium point. This concept is also named after its inventor, the mathematician John Forbes Nash, as Nash’s point.

Nash’s formulations are incorporated into a wide range of disciplines, especially in economics and game theory. Be  the profit function of a player ; be  the variables controlled by this player and  (with ) the remaining factors that affect his/her earnings. The optimization process of the profit function can be written as:  for any admissible . Consider now a game with  players. Each of them will try to optimize a different gain function considering its own strategy  and the strategies  of the remaining players. A Nash equilibrium is reached when the 𝑛 inequalities are verified simultaneously, thereby optimizing all the profit functions and leaving the players with no incentive to change their strategies.

In the case of elasticity coupled to continuous damage, the Nash point depends on only two “players”. The independent variables of the problem are the displacement and continuous damage fields. The first of the functional inequalities corresponds to the principle of the minimum potential energy for a non-homogeneous structure whose elastic properties depend on local damage values. The second inequality is a variational formulation of the damage evolution law. Therefore, the first inequality depends on the free energy accumulated in the structure and the second on the energy dissipated by damage. The equilibrium state is the result of a “game” in which one of the “players” tries to transform mechanical work into reversible energy, and the other tries to dissipate it by degrading the mechanical properties of the material.

As it is well known, continuum damage mechanics gives objective numerical results only before localization as defined by the Rice and Rudniki criterion. This criterion describes the conditions for the appearance of discontinuities in the displacement and damage fields. Lumped damage mechanics (LDM) is based on the following description of the process of energy dissipation. In a first phase, the dissipation is continuous and can be described using some continuum damage model. This phase ends when the location criterion is verified. In the second phase, the dissipation can be considered as concentrated in areas of zero volume (lumped damage) and is a consequence of the evolution of the discontinuities. Nash’s formulation offers an interpretation of the non-objectivity of classical damage models and a procedure for regularize them: the variational inequality of energy dissipation lacks a term of lumped dissipation; as the classical models do not specify how much and how this dissipation evolves, the problem may exhibit an infinite number of solutions; in LDM, an “extra player” is added whose variational inequality describes the lumped damage evolution law, therefore completing the description of the phenomenon. In this seminar, the numerical implementation of LDM models in conventional finite element programs is also described, objectivity is shown in all the phases of the process and the formulation results are compared with experimental analyses. Additionally, it is shown that classical damage and cohesive fracture mechanics can be considered as particular cases of the LDM formulation.

LDM, as the theory of plasticity, can also be used for the analysis of plates, shells, beams and frames. In those cases, plastic hinges or hinge lines are generalized including lumped damage variables. In the last part of the seminar, a simplified model of these characteristics is presented and its consequences in the field of reliability and stochastic analysis of complex structures are analyzed. It is demonstrated that the use of LDM allows to significantly increase the limits of validity of any numerical statistical method, for example, the Monte Carlo one.

We use cookies on our website to give you the most relevant experience by remembering your preferences and repeat visits. By clicking “Accept All”, you consent to the use of ALL the cookies. However, you may visit "Cookie Settings" to provide a controlled consent.
Cookie SettingsAccept All
Manage consent

This website uses cookies to improve your experience while you navigate through the website. Out of these, the cookies that are categorized as necessary are stored on your browser as they are essential for the working of basic functionalities of the website. We also use third-party cookies that help us analyze and understand how you use this website. These cookies will be stored in your browser only with your consent. You also have the option to opt-out of these cookies. But opting out of some of these cookies may affect your browsing experience.
Necessary Sempre abilitato
Necessary cookies are absolutely essential for the website to function properly. These cookies ensure basic functionalities and security features of the website, anonymously.
Functional
Functional cookies help to perform certain functionalities like sharing the content of the website on social media platforms, collect feedbacks, and other third-party features.
Performance
Performance cookies are used to understand and analyze the key performance indexes of the website which helps in delivering a better user experience for the visitors.
Analytics
Analytical cookies are used to understand how visitors interact with the website. These cookies help provide information on metrics the number of visitors, bounce rate, traffic source, etc.
Advertisement
Advertisement cookies are used to provide visitors with relevant ads and marketing campaigns. These cookies track visitors across websites and collect information to provide customized ads.
Others
Other uncategorized cookies are those that are being analyzed and have not been classified into a category as yet.
ACCETTA E SALVA